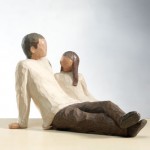 Oh how I hate that phrase.  It generally means I’m about to hear something bad.  I know that sounds pessimistic.  Sorry, maybe I’m just scarred from one too many uncomfortable conversations that began with the words “Shannon, can we talk?”   But I’m learning that this doesn’t always mean I’m about to hear the world is about to come to an end.

My kids have started asking this question – “Dad, can we talk?”  The first time I heard it, I got a twinge of that nervous feeling in my stomach.  My imagination ran away with me.  (insert chimes here, I’m staring blankly off into space thinking about what they are about to tell me, the screen goes squiggly lines and I’m imagining the worst)  “Dad – I did blah, blah, blah, blah and you need to know because blah blah blah blah happened and now you’re going to have to pay blah blah blah.”  Then I snap out of it, they’re looking at me like I’m crazy cause I was just trippin in imagination land and the conversation ensues.

So far, its never been anything terribly serious, to me at least.  To them?  Oh its been the worst.  The hardest, the most horrible.  “I have no friends.”  “I got called a name, then I tripped in front of everyone, and I hurt my elbow, see?” I look intently, finding nothing except a little hurt pride.  This happened recently, nearly three conversations back to back with three separate kids.  “Can I talk to you Dad?”  And we did.  In some cases there were tears, in others there were just words.  But I had a revelation near the end of the third conversation.  There was the emotional meltdown, tears, snot, snubbing, telling me everything that had gone wrong that day, then she laid her head over in my lap and said, “I guess – I just needed some dad time.”  <please hold as I compose my self for a minute>.

“Dad Time”  I know what that’s like.  Its a real need.  For all of us.  Sometimes I wish I could sit down with my dad and say, “Okay, How do I do this?  How do I be the man, I’m supposed to be?”  Its not always easy to do that over the phone, and a five hour drive to see him isn’t the easiest thing to do either.  Thankfully, I can have “dad time” with my Father, God.  He even invites me to come to Him, when I’m tired, weary, weighted down, just needing “dad time.”

But here’s the thing that I realized a couple nights ago sitting on my porch swing with one of my girls – I LOVE it when they come to me with their stuff, and just need me to listen, to hold them, to dry their tears.  Its what being a dad is all about.  I guess the greater revelation was that God loves it that much when I come to Him.  Putting my head on his shoulder, unloading on him – Dad Time.

I don’t know what you’re going through today, but I do know this –  You have a Father in Heaven who loves you so much.  He see’s what you’re going through, and He invites you to come to Him for some quality Dad time.  He’s not nervous, about a conversation with you.  He’s got big shoulders, big enough to handle what ever care, emotion, or struggle you want to throw on His shoulders.

“Come to Me, all of you who are weary and burdened, and I will give you rest.”