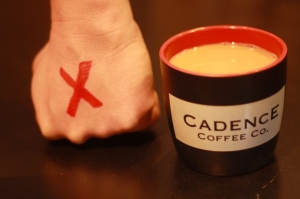 A year ago, I noticed a barrage of red “x’s” on my Facebook & Instagram feeds and quickly learned that this was a new effort to make more people aware of the fact that there are 27 million slaves in our world.  Honestly, I brushed it off as a fad.  Just another cool thing to do, to post about, something to check off a list of “things I hope make a difference.”

Later that year, my wife began reading a book called, Redeeming Love, and she couldn’t put the book down.  I didn’t read it, but I did find myself reading over her shoulder near the end and was intrigued by the story line that spoke of human trafficking, but also revealed the picture of a redeeming love that sets captives free.

Sometime later, she was telling me about an organization that she began to follow called The A21 Campaign.  Before long she ordered a bracelet from them, and she’s hardly taken that bracelet off since she had it.  This bracelet reminds her to pray for human trafficking victims around the world daily.

Around that same time, I ran into my friend, Jerry,  who is leading the effort to increase awareness of human trafficking and the role our small southern city plays, through an organization he leads called Second Life Chattanooga.

My wife told me, and today I’m telling some one else.  The more we tell the story, the more awareness grows, the more we can collectively know what to be looking for when we may encounter human trafficking, and the more we can do to end this plague in our earth.

As a Christ follower, this is exactly what we’ve been called to do:

Today, February 27 is Shine a Light on Slavery Day, as sponsored by the End It Movement.  I have a red X on my hand today. At Cadence Coffee today, customers will have the opportunity to join the movement by giving to fight the cause or simply putting a red X on their hand as well.  We are using the platform we have, to tell the people we see that there are still slaves in this world, and we’ve been called to End It.

Because after all its not a fad.  Its a Fight!