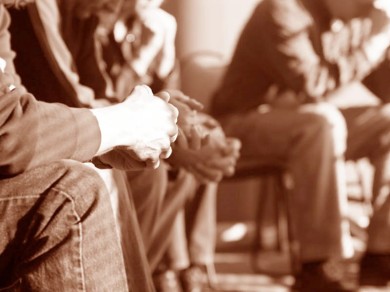 “What time do you guys open?” he asked as I took his coffee order late one Thursday morning.  “6:30” I answered simply.  He lives across the street from our shop, and apparently as he was coming home earlier that morning around 5am when he noticed a “string of cars” in front of our shop.  As he was describing what he saw that morning, he said, “I thought Holy @!#& that’s looks like a bunch of college kids in there.  What the %$@! are they doing there this time of day?”

I had to chuckle as I answered his question, “Oh yeah, those guys.  They meet me here every Thursday morning for prayer at 5am.”  He suddenly went speechless, in fact he stepped away from the counter like I had said the most shocking thing he had ever heard.
I guess it is rather surprising, isn’t it?   Who would ever put words like “college students,” “prayer” “5am” in the same sentence.  I certainly would have never dreamed it.
I love reflecting how the whole thing got started.  I was sitting with a handful of guys on Wednesday morning.  I call them B.O.B. or my “band of brothers.”  We were talking about being hungry for more of God.  Experiencing more of Him in our lives.  We started talking about early Christians in the book of Acts and how awesome it would be to live the kind of life they lived.  Suddenly one guy, leaned back in his chair and said, “Quite frankly, I’m tired of talking about it, I want that kind of life.  How do I get that?!?” A single word  came to my mind in that split second, the word “prayer.”
“Well then,” he said “Lets pray.  When can we get together like they did and pray?”  We all started comparing our schedules and at first there wasn’t an obvious time that worked for all of us.  So we did something revolutionary, we prayed right then and there for God to show us when we could get together to pray.  We said “amen,” and I asked “ok, when do you guys want to pray?”  One guy  asked, what time I got to the shop everyday. My norm was 6am.  “What if we meet you here tomorrow morning at 5am?”  I literally laughed out loud.  I couldn’t believe what I was hearing.   I’m generally awake by that time every morning, but these guys, these college students were suggesting getting up to meet for prayer.  I told them that if they would be there I would be there.  The next morning when I arrived at the shop at 4:55 they were there waiting, all five of them.
I’ll never forget that first morning of prayer.  One guy laid himself right there on the ground face to the floor in front of our counter crying out loud for more of God.  Another guy, knelt in front of the windows, like a Daniel in Babylon, crying out to God.  It was powerful.  As the weeks went by more people began to join us.  Most weeks we saw as many as 20 or more students gathering to worship and pray.
I can’t tell you that we’ve seen miraculous signs and wonders on Thursday morning.  I can’t tell you that fire has fallen from heaven like in the book of Acts.  But I can tell you something has happened inside of me.  I’ve fallen in love with being in God’s presence.  I’ve loved gathering with sons and daughters of God, who simply want to be with Him.  I feel like I’ve gotten to know Him better in the last two months on Thursdays @5am than I’ve known Him my whole life.
I’ve recently set a regular time aside for our church to gather together for prayer.  This is a weekly gathering for us as sons and daughters of God to simply come together for one purpose, to be with Him.  I think this is kind of a big deal.  In fact I’ve told the folks at RiverChurch that if they’re going to miss a gathering at RiverChurch, don’t let it be our prayer time.  I just know, as a father, that one of the things I enjoy the most is when my kids just hang with me, cuddle with me, simply desire to be where I want to be.
Do you have a Thursday @5am?  It doesn’t have to be literally Thursday @5am, but do you have a time where you simply just spend time in God’s presence, praying and listening?  What’s that time like for you?  If not, what’s keeping you from setting that time aside?  If you’ll make it a priority, I promise you, your life will never be the same.
The semester is coming to an end this week, and we met for the last time last Thursday,at least until the Fall.  For a brief moment, I thought about taking a break myself, and starting Thursdays @5am back in the Fall.  But I just don’t think I can do that.  Something keeps telling me to still show up, I have a feeling someone will meet me there.